UCDSU attended the Winter of Housing Discontent rally earlier, which was organised by the National Homeless & Housing Coalition (NHHC).

Also in attendance are the Union of Students Ireland (USI), the Community Action Tenants Union (CATU), opposition parties such as Sinn Féin, People Before Profit, and the Social Democrats, MICA Action Group, The Irish Traveller Movement, and others. During the previous few days of second year orientation, UCDSU handed out over 3000 leaflets to second years visiting campus for the first time.

Power argued that UCD’s stance on accommodation prices were “discriminatory” and “deliberately blocking out students from low and middle income backgrounds.”

“We want to see a vacant property tax to tackle the scourge that this property hoarding in the Dublin area.”

An NHHC statement released before the rally stated:

“It has become obvious in the past 18 months of the pandemic that the housing crisis affects people from all walks of life and increasingly so. Homeless deaths have escalated to an alarming level. Homeless individuals and families are spending longer in emergency accommodation. It is impossible to rent somewhere to live at an affordable cost. Tenants have little to no protection. It is impossible to buy somewhere to live. More than 55,000 households are in difficulty with mortgage arrears. Accessing housing continues to be an issue for students. Traveller accommodation budgets remain unspent while increasing numbers find themselves in homelessness. Elderly pensioners are finding themselves homeless. People wait years, sometimes more than a decade, on local authority housing lists. Overcrowding, substandard accommodation in both the private and public housing sector is commonplace. Hundreds of thousands of derelict buildings scatter the landscape. 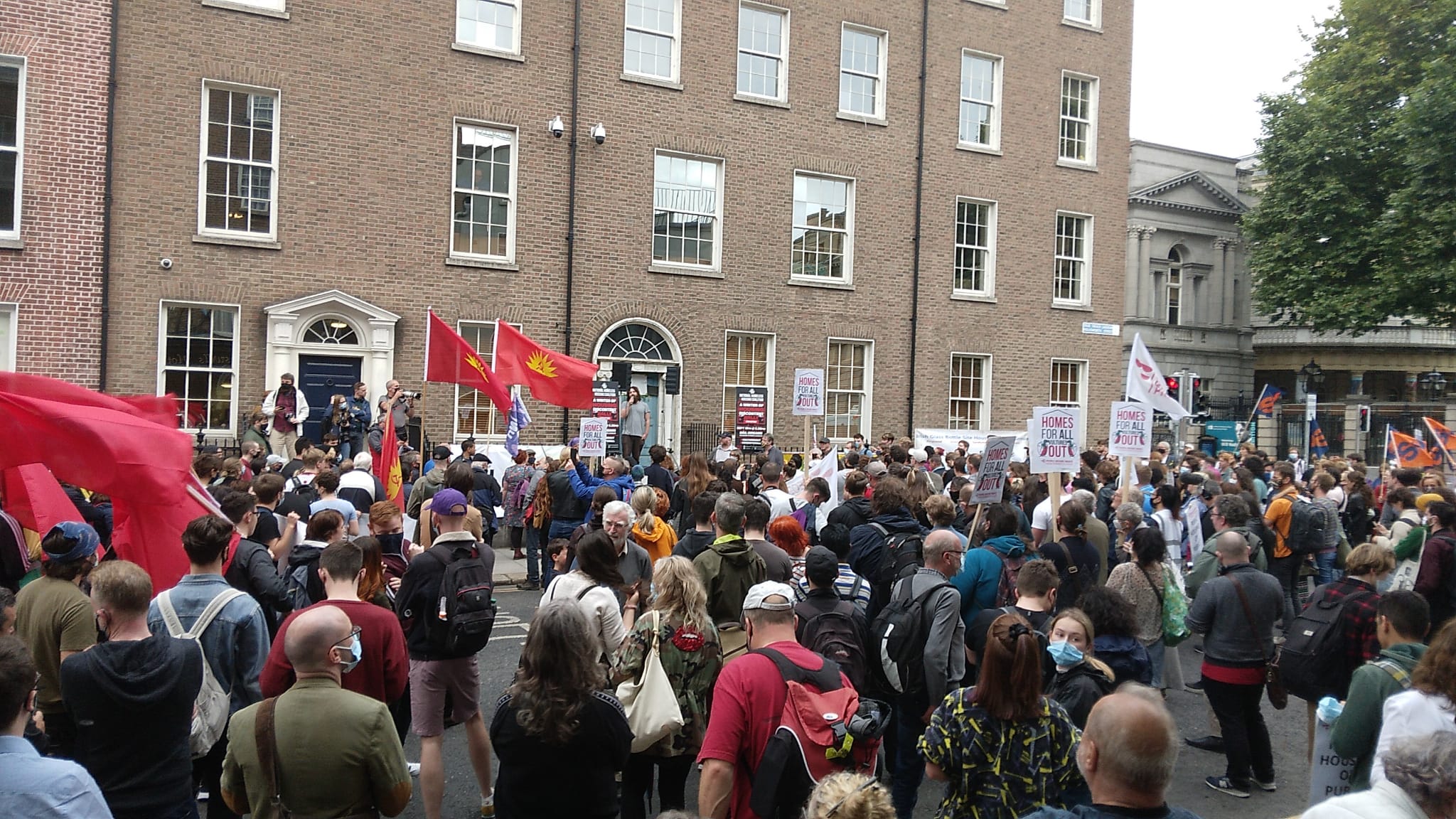 Meanwhile, government policy in the past five years has increasingly favoured vulture and cuckoo funds and corporate landlords. They get tax breaks. Standards are lowered to make it cheaper for them to build student accommodation, co-living and build to rent. By benefiting private landlords and property investors, the price of accommodation continues to escalate making housing ever more unaffordable. These same funds are buying up entire estates, whole apartment blocks and sometimes they are leaving them empty so that they accumulate in value.

People’s lives are being put on hold because they cannot access secure, affordable, quality housing. An entire generation is being treated with contempt by this government and every piece of legislation passed that favours the landlords and funds is another kick in the teeth to those caught at the coal face of this crisis – a crisis made by government policy and made worse by them.

Beth O’Reilly, Vice-President for Campaigns for the USI spoke to the crowd: “This housing crisis is a student issue, and it’s an all-island student issue. There are thousands of students who should be excited about beginning the best years of their life, but instead they’re booking hostel rooms, begging for accommodation on Twitter or commuting across the country because they cannot find a place to live.”

The huge protests of people affected by the Mica scandal recently are an indication of the thousands we will see on the streets in the coming period.

The National Homeless and Housing Coalition are calling on people to begin to get organised in their communities to prepare for a time when we can put the pandemic behind us and mobilise in our tens of thousands – the housing movement must rise up from every street, from every village, town and city across the land just as the water charges movement did.”

Darryl Horan, UCDSU Campaigns and Engagement Officer spoke to the University Observer on student turnout to the protest “We’re absolutely delighted today we’ve got about 50 people, it’s a good start.” There is Raise the Roof demo on October 2nd, and Horan hoping for a further increased student presence.