The Abortion Rights Campaign (ARC) held a rally on the 25th of September outside of the Dáil, calling upon the government to act on the gaps in abortion care provision in Ireland.

Joanne Neary, ARC spokesperson, focused her speech on highlighting the often-overlooked difficulty in seeking an abortion in Ireland today. Despite the success of the Repeal the 8th referendum of 2018, only half of maternity hospitals and a small percentage of GPs provide access to such care, according to a published release from ARC. She noted that people seeking abortion all across Ireland today face “criminalisation, mandatory delays, widespread refusal of care and strict gestational limits that amount to a violation of our human rights”.

Speaking outside the Dáil, Ms Neary stressed that “The last 18 months have laid bare the deep inequalities in our health system and our society – those inequalities have the greatest impact on marginalised communities. We are calling on the government to ensure that this year’s legislative review delivers free, safe, legal and local abortion for anyone who needs it”.

Jennifer Ryan, chair of LMC Bereavement Support made clear that the removal of the 8th amendment has proved to not be enough to stop people from travelling abroad for their abortions. Speaking in detail, she commented that “Badly written legislation, criminalisation of doctors and the hangover of a medical culture that enjoyed exercising control over pregnant women have led to a situation where people have to travel to lose their baby”. 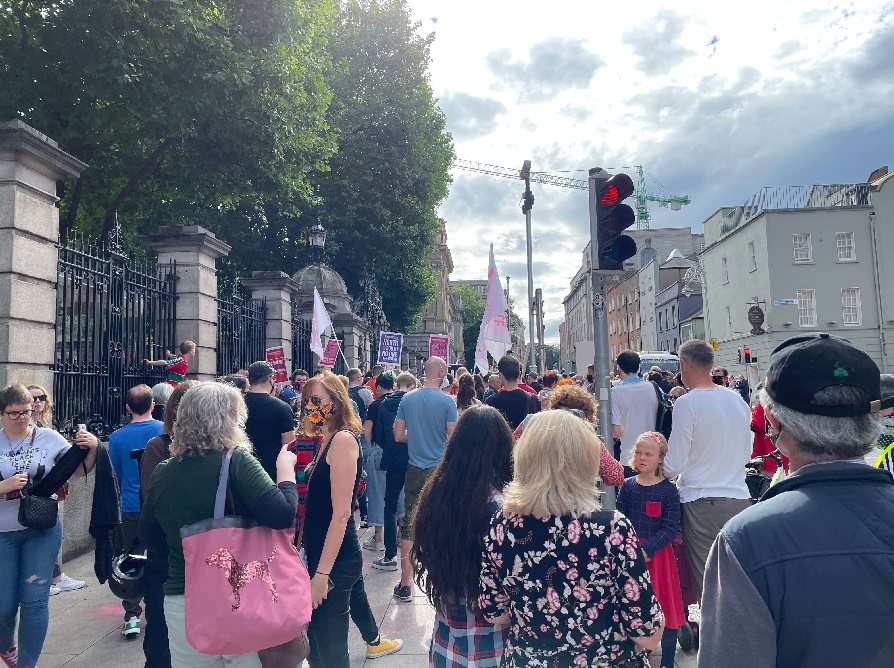 Speaking to the University Observer, UCDSU Educations Officer Aoife Bracken commented on the attendance of the UCDSU Sabbatical Team, stating that they aim to “show support for ARC’s demands”, voicing that they are “all behind” the demands being put forward at the rally. Bracken hopes that the choice to demonstrate outside the Dáil shows the government that they are serious about the cause.

Student’s Union President Ruairí Power spoke on the aim of the rally, expressing that they are “firmly behind the ARC’s demands that they are rallying for today”. Particularly, they are looking to “seek and end to the twelve-week restrictions, the medically unnecessary three day wait. We want to see legislation for safe access zones and regulation of rogue crisis pregnancy advice providers”. He calls for “significant revisions” of the current model, pointing out the need to remove remaining criminal barriers to access abortion. Speaking on the current circumstances, he stressed that “this is a healthcare issue, not a criminal one”.

The University Observer also spoke to Campaigns and Engagement Officer Darryl Horan regarding future events that students can get involved in, to which he noted that they are thinking on putting together a “reproductive week” for later on in semester two. Horan welcomes anyone who would like to get involved in such events, highlighting that there “there is work to be done, and its time to do that.” Horan closes, listing himself and Niamh Scully, the Gender Equality officer, as points of contact should any student want to get involved.