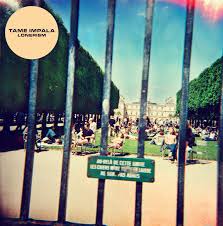 What’s this, an album of revivalist psychedelic rock? Use-worn words like ‘trippy’, ‘trance-like’ and ‘swirling’ hover before our very eyes, taunting us, begging to be used in this review. But, like Jesus in the desert, we shake our head grimly and persist on our noble if doomed quest to write something original.

Tame Impala, a term we are informed means ‘medium-sized antelope’, and the project of Perth’s multi-instrumentalist and stoner, Kevin Parker, returns with a second album since the lauded Innerspeaker, of 2010. Through a syrupy broth of fuzz-effects, echo, phasers and primitive synthesisers, Parker eschews the experimentalism associated with the genre in favour of painstakingly reviving the sound of his musical idols, resulting in a record that’s resolutely classicist.

In fact, it is nigh on impossible to listen without participating in this bizarre musical word search, where you rise from your seat and alternately shriek “Pink Floyd sometime between 1967 and 1972!”, “Magical Mystery Tour-era Beatles!” at numerous intervals. Parker’s voice even sounds like Lennon’s.

That said, the album is predominantly affectingly beautiful and shows real invention, reflected most notably on ‘Be Above It’, ‘Apocalypse Dreams’ and ‘Keep On Lying’; the intricate arrangements and thick harmonies are regularly entirely absorbing. Perhaps had this record been recorded in 1970 it would have been remembered as a classic.In A Nutshell: Intensely attractive music that occasionally wearies in its duty to the past.By Stephen Connolly

All 2020 UCD Graduation ceremonies to be held online

UCD AFC Return to the Bowl