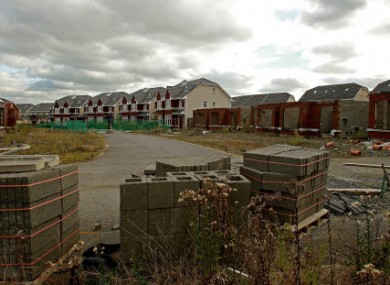 As reports emerge about the  extent of the oversupply of housing, Yvanne Kennedy looks at how the deflated housing bubble has left us with a colossal number of houses and ‘no one’ to live in them It isn’t exactly a secret that during the housing boom, developers and builders got more than a little carried away. However, like everything else, the housing bubble burst quite dramatically and many families, couples and others had to downsize or remortgage and they continue to struggle to keep afloat. Now, as our population grows by a ‘mere’ thirteen-thousand a year, we face a housing excess that even the best economists and financiers couldn’t have predicted.The idea seems a bit mad – not just that there are innumerous houses left vacant because of our taste for excess, but that we can’t find people to live in them. Last year, there were 5,000 homeless people in Ireland, not to mention an unprecedented jump of nearly sixteen per cent of the population who are living below the income poverty line. As for those that have homes, the Irish Independent reported last week that ninety per cent of children living in Dublin City Council apartments in Dolphin House had to miss school this year because of illnesses caused by the sub-standard conditions they were forced to live in. So why can no one be found to live in at least some of the nearly 300,000 homes that lie vacant?It may have something to do with the fact the homes are on the Atlantic coast, particularly in Kerry and Donegal; not necessarily the places with the most jobs or amenities for people to move to. There is then of course the issues of cost – who is going to pay for the rent, the electricity or the bills, and how? The problem with this attitude is that we’re not seeing the bigger picture. Much progress can be made once we approach this with a much more open mind.Rather than leave these properties empty, they could be given a purpose. For example, those who are homeless could move into these houses. These people would maintain these houses, and look after their upkeep. Should they be drawing social welfare, it would be the case they would pay an agreed amount from that to the local council or the government. They may be in a position to work for a number of hours a week, but should this not be the case for certain individuals, it is realistic to believe that they may be able to at some point in the future, and at this point, they can begin contributing towards the cost of the property. This is not just a solution for those who are homeless. Those who still retain their employed status may also pay an agreed amount if they are struggling.These properties are just sitting there, unoccupied and unused; they aren’t benefitting anyone at all as they are. The fact these houses are concentrated in certain areas can be seen as a strength instead of a weakness. The key is to get people into these areas, to make them places to be lived in. The big picture can be realised if we allow the housing issue to become a joint effort. The majority of these properties are on the west coast, a coast that has three good-sized airports, good trade links with the States and many business premises that are similarly vacant.If it was possible to work with the airports, work with the people who own the vacant business premises, there is possibility for growth. If we could offer housing to these companies as part of a ‘package’ of sorts, we would get a leg up on a lot of other countries where this just isn’t possible. We have the airport for imports, the buildings for the actual business and now a place for people to live. Even if the houses were given to the companies for little or nothing, they would be maintaining them, paying utilities and most importantly, bringing money into the economy in these already economically disadvantaged areas of the country.NAMA have indicated that they plan to complete the homes and business premises around the country that are yet to be finished, at a cost of two billion euro, a plan that has been called wasteful and unnecessary. It will, however, create twenty-five-thousand construction jobs and provide much needed income for those who are strapped for cash. Following from that, it is far from outside the bounds of possibility for these houses to be converted in some way so that they can be put to other uses that are needed more immediately.Whatever we do, we should not get rid of them, we will need them in the future and it’s an absolute waste for which we won’t be appreciated. Bulldozing should not be an option, there has to be heed given to the future and we have to know that the good times are coming again, be they ever so far away.