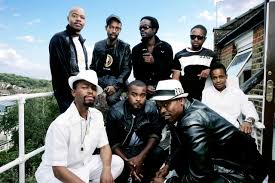 “What’s the craic man?” asks Gabriel Hubert, more commonly known as Hudah, as he gives a warm greeting, clearly well versed in Irish colloquialisms. This is no doubt something he has picked up from the various dates they’ve played here.

The Chicago native is one of eight brothers in one of the hottest jazz acts today: Hypnotic Brass Ensemble. From first performing in 2007 at the Sugar Club, to playing multiple dates at the Button Factory, along with a slot at Electric Picnic, Hypnotic Brass Ensemble have made their mark in Ireland, leaving with them a trail of new fans each time they return.

Like many before, they started out busking on the streets of Chicago, slowly gathering attention. While others would fall by the wayside, Hypnotic managed to make it, in no part thanks to their father’s support

Their father, Keelan Phil Cohran, a respected Jazz musician, was the driving force behind the group. First playing as part of Cohran’s youth ensemble in a warehouse behind the family home, the eight brothers eventually formed their own group under influences of hip-hop and jazz. “My musical education, knowledge and inspiration all derived from my father’s teachings. When I hear tones, I hear them in a celestial form so they were a major impact on my development.” When you combine this with the fact that their other brothers, sisters and mothers are professional musicians and singers, it certainly seems they were destined for the stage.

Their name itself came from a commuter who stood in wonder, watching the group at a train station. “You guys just hypnotised me,” the suited man told them having watch them play for hours. This is certainly something that still rings true and aptly describes the effects created by the brothers as they’ve earned a universal reputation for dazzling live sets. “Our music is universal as opposed to a lot of others, our audiences range from elders to youngsters to babies; it all depends on the vision.”

Performing with the likes of De La Soul, Prince, Wu Tang Clan and Mos Def, Hypnotic are causing heads to turn across different genres. They were even asked by Damon Albarn to collaborate with Gorillaz on the track ‘Plastic Beach’ (2010). Working with different artists is clearly important to the group. One of their many collaborations sticks out in particular for Hudha: “Playing with Prince was one of the highlights of my life, just being able to be on stage with that guy, to converse with him in any way.”

This is a band that has persevered to reach a certain audience around the world. Making the transition from Chicago to New York, and independent to label, has placed Hypnotic Brass Ensemble en route to global recognition, perhaps most markedly demonstrated in the use of their track, ‘War’, in the US blockbuster, The Hunger Games. When asked if they felt any vindication or increased attention post-release, Hudah admitted: “We are known across the globe, by a lot of different people and they’d go ‘Hey was that you guys? I think that was your song...’ If you didn’t know Hypnotic, then you didn’t know that we had a song in a movie.”

While the success of the movie wasn’t replicated for the band, a ripple effect was in motion. “It’s one of those innate feelings that you just know when you’re doing something right, it was just a matter of re-strategising.”

Since 2004, Hypnotic Brass Ensemble have released a record of some description every year, showing there’s no lack of originality inhibiting them. Bulletproof, their latest EP, has, much like its cover art, come out with guns blazing. Infectious energy with flagrant bass lines cause you to take note of how they make music.

Cohran placed them in a regimented upbringing with 6am starts, which they’re thankful for now. With “dreams of becoming world renowned stars” it was always a case of when, not if, they’d make it to the world stage.

In a time where genres are blurred and recipes for success reciprocated, Hypnotic are passionate about doing their own thing. Moving to Handcuts, a Japanese label in 2007, Hudah realised that although they had more press and it was “very pivotal in that transition” helping them be taken seriously in the business sense, “financially it was a different story.”

Where they are today is a testament to the pragmatic approach Hypnotic have employed. Such is their influence, David Byrne and St Vincent’s new release ‘Love This Giant’ credits Hypnotic among others for the brass inspired album.

Working with both Childish Gambino and RZA on the track ‘American Royalty’, both of which whom appeared in front of the camera, the idea of making the same transition must play on their minds. Asked if there’s a possibility for expanding the Hypnotic résumé onto the big screen, Hudah certainly has aspirations: “The next part of our journey is radio and television to allow our music to continue to grow, to allow our movement to reach more people and to sustain that fan base we would need radio and TV.”

At the forefront of the jazz revival (which is a hefty task in itself) they have no intentions of leaving New York anytime soon. For the meantime, Hypnotic will continue to tour, promoting Bulletproof with a clear vision intact they’ll undoubtedly win over even more audiences across the globe.

Hypnotic Brass Ensemble return to Dublin to play the Meeting House Square on Oct. 20th, as part of the Becks Vier Rhythm Weekender. Tickets are priced €22.50.By Kieran Lynch

UCD welcomes the creation of the Department of Higher Education and Research.

Ireland must confront its own antiblackness