Doireann de Courcy Mac Donnell, in conversation with Dr. Ellen Rowley, discusses plans for Belfield 50 and the architecture of UCD

Belfield 50 is not an event, it is a celebration.  A celebration of the campus of University College Dublin being here. In actuality, the UCD campus has been in development in Belfield since the 1930s, when the university was investing in buying land for sports facilities. However, 1970 was chosen as a significant date to celebrate as it marked the opening of the Arts, Law and Commerce Building, now the Newman Building. In conversation with Dr. Ellen Rowley, on the first floor landing of the Tierney Building, I discussed Belfield 50, what it is and why it matters; “UCD are saying that this is a moment to celebrate where we are and also to step back and look at the buildings that we have made.”

In 1933 University College Dublin officially began making the move from Earlsfort Terrace to the green fields of Dublin 4, when they purchased Belfield House. In the years between 1948 and 1958 the university continued acquiring adjoining properties in an effort to create a large campus, a far-cry from the cramped accommodation in Georgian Dublin.

“The president at the time, Michael Tierney, in 1947 is really keen on doing it. [He] is over looking at campuses in the states. He has some interest in campuses in the Nordic countries, probably Sweden – we’re not sure, as he’s sending people over as well to look at student residences and different typologies of models – very international thinking. He’s doing that from 1947 but he doesn’t get the go ahead until the late 1950s and then a competition is launched in 1963”

The competition, referred to by Dr. Ellen Rowley, was an open competition to design the master plan and key buildings of the new campus .The project was awarded to Andrzej Wejchert, a young architect who had never built anything. Having moved to Ireland and set up his practice, Wejchert strived to create a utopia in Belfield, a brave new world.

“A young architect Andrzej Wejchert, had never built a thing and he moves over to Ireland and he sets up a practise. He has to partner with an Irish firm RKD, who are still engaged. [The Tierney building] would be the apotheosis of the plan. This is the building for the President, Communications. The campus plan is about making a utopia, it’s about creating a whole new world. You have water, you have green. Those things are already here. There were amazing walled gardens, [though] a lot of them [were] compromised through making roadways through the place”.

According to an article written in The Irish Times at the time, South Dublin is not much different from the hinterland we know today. In 1963 it was published that “the prospect of finding lodging for students (was) causing more and more concern …The area is not one in which students will easily find places to stay, since most of the houses there are designed as family homes’’, a sentiment which rings true today. Rowley mirrors the 1963 article’s point in saying; “What [the master plan] lacked, it has [since] made up for... When it was finished it had no services initially… There wasn’t a single shop – imagine how desolate that was... The restaurant came after the arts building, pretty quickly. But there were no homes here and when people aren’t living in a place it lacks something.” Student housing was only built from 1989,1990 and 1991, and have consistently been added to since.

I asked Rowley whether or not she thought the architecture, and the masterplan of UCD was successful; “I would say the original campus design is hugely successful and I think if you see the enduring relevance, in fact even more lately, of the walkways. They really are something. Obviously they are a physical spine but they are also a metaphysical spine as well.” she responded. “Wejchert continued to be engaged by the university after the initial things were done...The initial things [are] the walkway, the Arts, Law and Commerce building (which is now the Newman building)...the water tower and The Tierney Building (the administration building and the Aula Maxima). The [true] Aula Maxima was not actually built for twenty years, and that was the O’ Reilly Hall. The Aula Maxima is venue for all the ceremonies. They are the main pieces. After the water tower his practice engaged with the sports centre. The original sports centre is an incredible concrete pour. The buildings are very high quality, and as a conceivable idea, and as a people of cohesive planning I think it is really intact. [Wechert’s] plan enabled something like Robin Walker’s restaurant building to be slotted down and then immediately after that Paddy Rooney’s agriculture building again to sit off the spine. You have J V Downes science building, you have the chapel, you have the walkway, you have the agriculture building and you’re moving all the way down towards the big celebration which is marked by this piece of water. Then you turn the corner and you have the library, by Sir Basil Spence, again another architect. Wejchert’s plan enabled other architects to come in and put staple buildings but to link them off this walkway.”

I was very surprised to hear the number of architects involved in the creation of the cornerstones of UCD, their incredible cohesion; “Isn’t it uncanny? I agree [they are very cohesive]” Rowley responded. “[First there is] the rectilinear. I know that is only a form, but that form has an essence to it. And it is just like this palette of materials is very limited; concrete, some timber, there are hexagons, some hexagonal and octagonal planters, there are waffle slabs. These things are repeated everywhere around the campus. There is a coherence with that. And even Robin Walker comes along, and he is from a very different school of thought. He is very Miesian in his thought. He is looking at the Neue Nationalgalerie in Berlin, and still his building emerges from the ground as if it is anchored and means to be there. Similarly Paddy Rooney’s agriculture building is pretty 1980s post-brutalist… and again it has this palette of materials that works.”

“[The buildings] are to be built and dispersed in a very connected, organised way off the walkway. The walkway turns corners, it cants, it shifts its horizon. It is not that emphatic. It is open both sides. It’s only emphatic nature is that it’s very low, so it keeps you sheltered. Even on a bicycle, when you’re higher up it still really works with your scale. Wheelchair, walking, buggy, cycling – very tall very small it works with human movement. I feel that is the genius”.

When asked what was her favourite building of UCD, Rowley answered “For me it is this building [The Tierney Building]. All of these stairs. This is a really luxurious space, it is like a baroque room, so much of the space of this building is about circulation; the generosity of free space that Shelly and Yvonne [of Grafton Architects] were talking about last year in Venice [when they curated the ‘Discovering Venice: Free Space’ exhibition at the Biennale Architettura 2018]. This wouldn’t happen now, this little area here, because it is unprogrammed. That is what Robin Lee tried to do with the Confucius Institute. He tried to make loads of unprogrammed space because in a university there is such a diversity of function needed.”

However, a problem which has consistently been faced by Irish architecture for generations is that, as so deftly put by Rowley; “this generation of buildings, from the 1940s to the 1980s are the generation of buildings we love to hate. We have this consensual hatred and, as a result, their value is down the toilet.” In an age where the campus of UCD is changing before our eyes Belfield 50 could not have come at a more pertinent time; “Only by intellectualising; finding out why something was built, who built it, where they came from - the whys, whats and hows of a structure, and constructing the history… do you unveil... the whole interpretative world, phenomenology, of that building - the whole life of that building.”

Yet Rowley equally acknowledged that the architecture and inhabitation of the buildings must be sympathetic to the current user; “there are various publics here; there is the student body, which comes and goes – which is really invested at the time but it is transient. There is the staff, which is probably the most invested, and then within the staff there are academics [and] there are administrative staff. [Within] the administrative staff there are the Estates Staff, who are in charge of the buildings. For Estates, these buildings speak a language of obsolescence. They are over 40 years old, they have had enough. They are really unadaptable, especially the concrete buildings, and so then some of the more hybrid [roles], like librarians, who are both academics and administrators, find the building really difficult to deal with. They are getting small pots of money, and they [are trying to informalize] all spaces.” Yet since these efforts are short-term, and building specific Rowley admits; “[a lot of] work [which] has been done of late is really problematic and really reflects the lack of value around the original meaning, impact and intention that these buildings had. The architectural intention is disappearing.”

“I mean the architecture isn’t a story that is told as we know, it is very fringe, very peripheral, but because the campus is developing in new ways this was an opportunity to celebrate the whole campus as a layered entity. Obviously I am more interested in the old stuff but the future of campus is extremely important with the Stephen Holl development and obviously the university wants to be proud and loud about that because it is ‘star-chitetcure’.”

As part of the Belfield 50 celebration, Rowley and Finola O’Kane Crimmins, a Professor in the School of Architecture, will co-edit a book of essays on UCD; “that unpacks old scholarship and brings new scholarship to the fore, keeping the campus as a central thread”. Rowley is also constructing a walk-through experience for the campus; “an architectural walking tour which is downloadable on SoundCloud. It will be a forty minute long experience. I would like to overlay other pertinent voices on the campus, so when you stop somewhere, you hear about a certain initiative in a certain building, not just the bricks and mortar, the concrete blocks.” Finally, an exhibition will be held, celebrating the campus. As part of the Belfield 50 initiative Rowley is also teaching Masters students in the School of Architecture; “working with them, seeing the campus through their lens, through their eyes and uncovering the research, new archival research, with the students. So there is a pedagogical slant to it.” 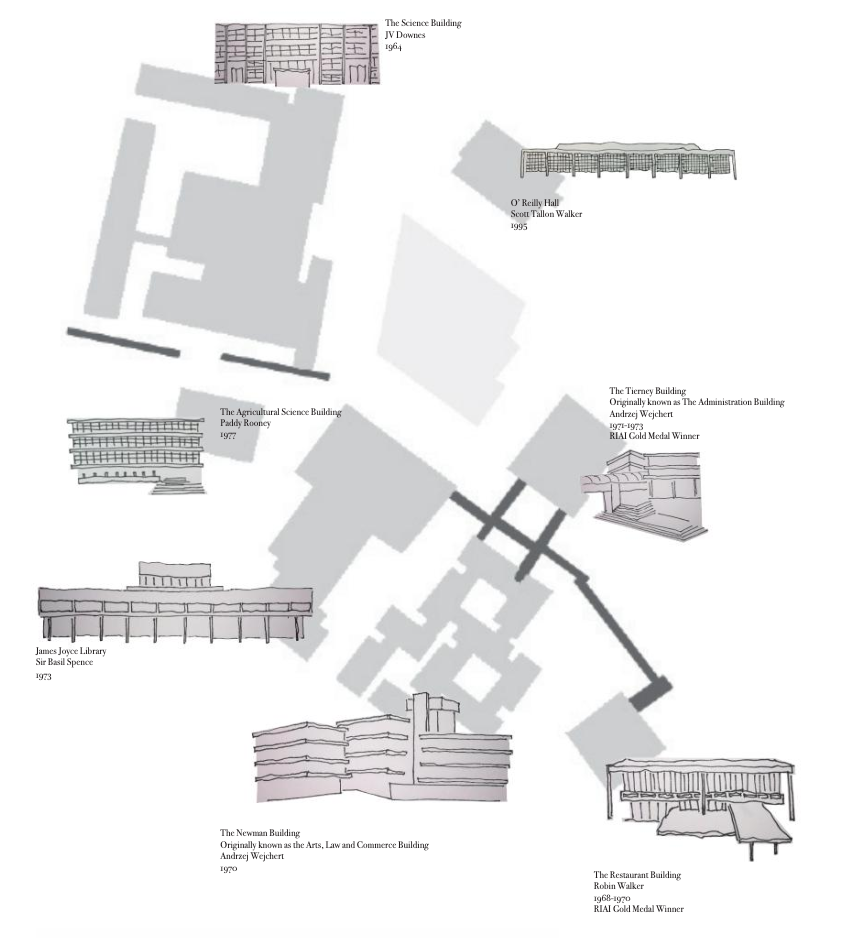 What do the newcomers think of Professor Cahill?

The Problems with the Stamp 1G Visa