On February 25th, the End Direct Provision Action Group (End DP) held a rally outside the National Gallery of Ireland, in protest of Aramark recently procuring the Gallery’s cafeteria contract. Aramark is a US-based catering company that profits from providing meals for the US prison system and feeds the residents in three large Irish direct provision centres.

The direct provision system of temporary accommodation for people seeking international protection in Ireland is notoriously inadequate (even being deemed a violation of human rights by Amnesty International) and has been profited on by private corporations. Aramark has been contracted by the Irish state to run three direct provision centres in Cork (Ashbourne House), Westmeath (Athlone Accommodation Centre) and Clare (Knockalisheen Direct Provision Centre).

Not only is Aramark incompatible with NGI’s purpose and values, but the Gallery has actively given space to an exhibition highlighting the voices of those suffering under the direct provision system.

These catering contracts are certainly lucrative ones - the Catherine Day Report estimated that in 2020, the Irish government spent €183 million in 2020 on direct provision centres. In 2018, Aramark received €5.89 million for their three centres, and in 2014-2018 the Westmeath centre alone received €9.51 million. This would not necessarily be such a large problem if the conditions in Aramark centres were not reported to be as terrible as they indeed are.

In 2015, residents of the DP centre in Clare began a hunger strike in protest to the poor standard of food, as the food was described as poorly cooked and unchanging for years. In 2018, MASI (the Movement Asylum Seekers in Ireland) reported that one resident in the Clare centre was refused a slice of bread for a child recovering from illness because it was not in the strict time frame when food could be served. They reported that if a meal is missed, residents can expect “to starve until the next meal.” 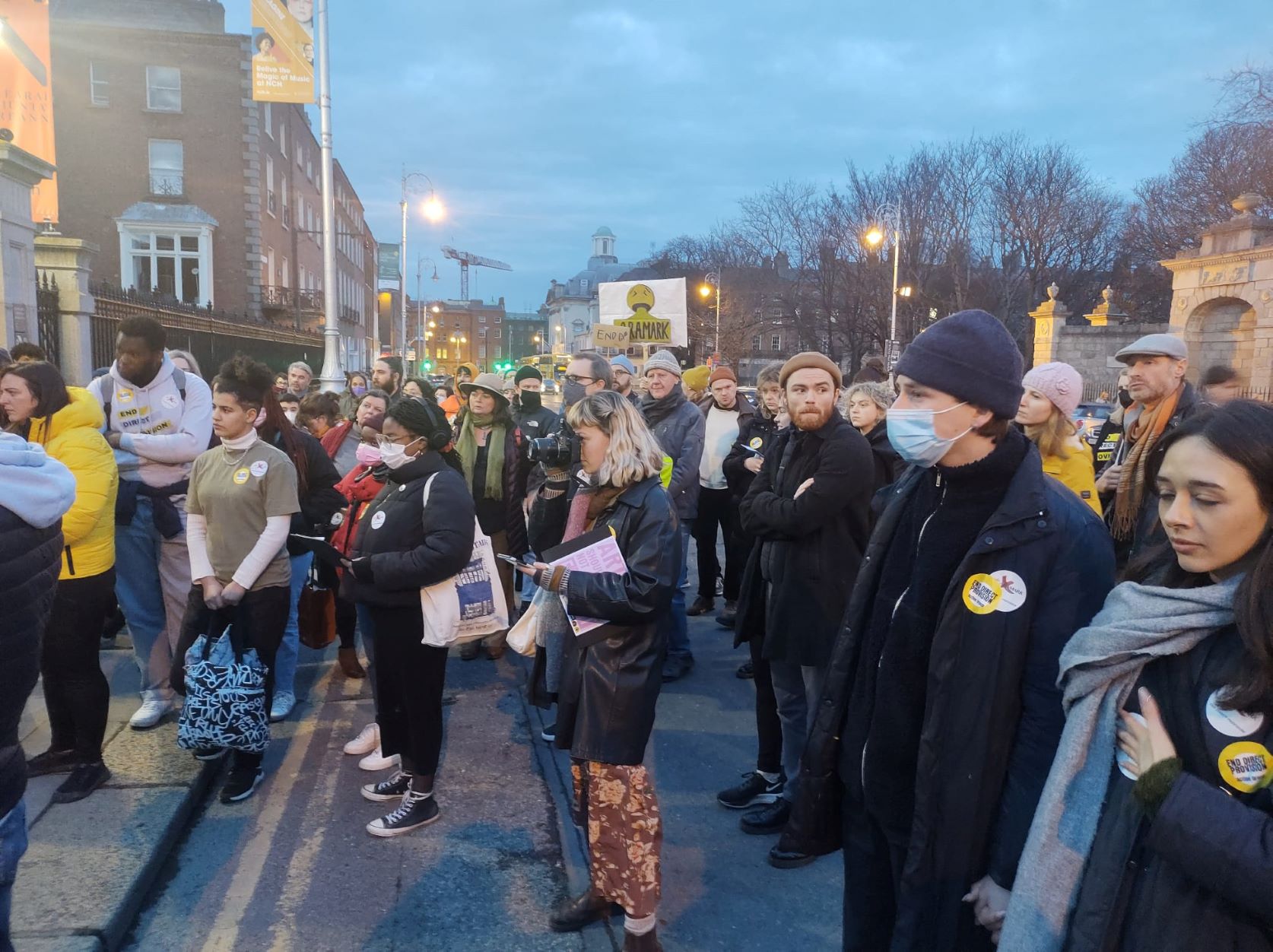 Many food providers in Ireland are owned by, or partnered with, Aramark. There may be private boycotts, such as Subway or Avoca, but when it came to overall protests and mass boycotts, Aramark’s presence on university campuses received the most attention. Universities market themselves as forward-thinking spaces, conscious of equality and human rights, and so partnerships between UCD and Aramark are hypocritical. This is also the case with the National Gallery of Ireland. The Gallery’s Strategic Plan 2019-2023 lists their values as:?

“-Integrity: We are united in doing things for the right reasons. We are here to provide people with the most enriching experience of art possible.

-Openness: We engage positively with a wide range of audiences and stakeholders, and approach our work with fresh ideas. We embrace diversity and audiences representative of contemporary Irish society and promote equality.”

Furthermore, in 2020, the National Gallery of Ireland ran a project resulting in an exhibition called Something From There. The project was created in conjunction with people living in, or those who formerly lived in direct provision and exploring the idea of home. The exhibition ran December 2020 - June 2021. Not only is Aramark incompatible with NGI’s purpose and values, but the Gallery has actively given space to an exhibition highlighting the voices of those suffering under the direct provision system. This point has been raised by gallery staff in their open letter following the contract, who note that Aramark’s values were “at odds” with those of the Gallery. The letter claimed that contracting the services of Aramark was in “direct conflict” with years of work that the Gallery had “invested in fostering relationships with this community and gaining their trust”. The NGI’s decision to appoint Aramark’s catering undermines the values of the NGI and suggests that the NGI is not concerned about doing things for the right reasons nor is it interested in the promotion of those who are disadvantaged in our society.

Direct provision is not a political, but a human issue, and perhaps we as consumers need to ask ourselves what we want from our capital city and its buildings.

The End DP Action Group is aware that it is within the Gallery’s rights to give their contract to Aramark, and that many more companies receive millions from the state to keep the system of direct provision going. Rather than demanding a contract change or insisting that Aramark is the only problem with direct provision, the point of the rally was to highlight how, despite the release of the White Paper to end direct provision, this is still ongoing. Creating conscious consumers is the goal in order to negate funding corporations whose presence in Ireland means massively profiting off a system that has provoked ill children being denied food, hunger strikes and the patronising treatment of adult human beings who deserve to be respected as much as anyone else in this country. This is not because Ireland is full of evil people, but because awareness-raising and momentum around the campaign to end direct provision still ebbs and flows, so the key point of events like this rally is to keep this momentum up and spread awareness. 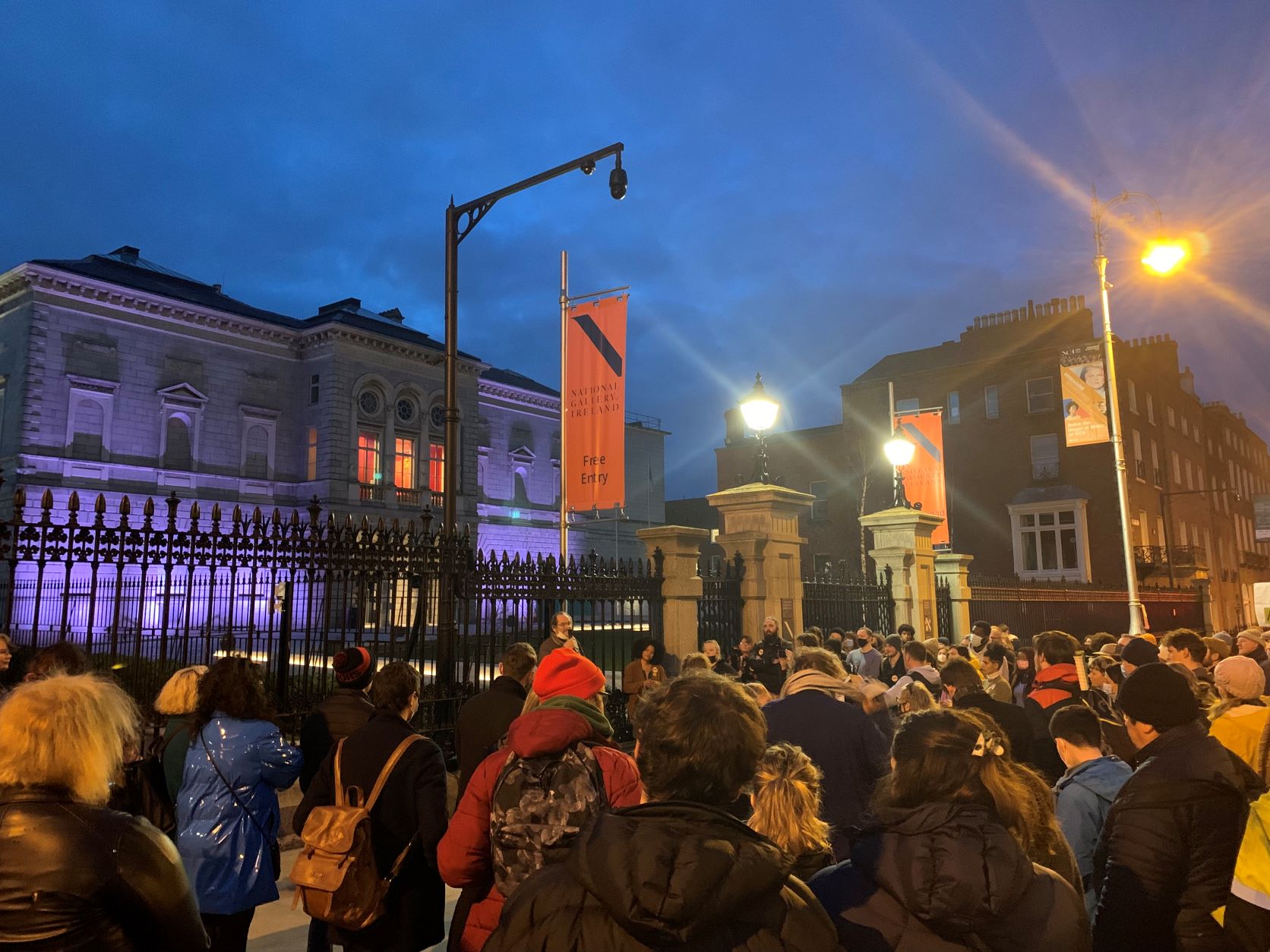 Some have responded to the recent noise around the National Gallery by saying we should not expect public institutions to take a political stance. Direct provision is not a political, but a human issue, and perhaps we as consumers need to ask ourselves what we want from our capital city and its buildings. If businesses and institutions wish to maintain contracts with companies, such as Aramark (and the National Gallery has made it clear in their statement on Aramark that they have every intention of doing so), then perhaps they should stop trying to appear as ethical institutions committed to fairness and inclusion, a merely tokenistic endeavour. At the very least, we as consumers should take ownership over our choices and be aware of precisely who and what we are supporting. If we want direct provision to end, and the White Paper to be followed through with, then we cannot go silent again on the case of the privatisation of direct provision, and the hypocrisy of companies’ claims to be ethical.

This is not just an isolated case: Travelodge Hotel in Phoenix Park received close to one million euros in 2020 to accommodate those in direct provision who were isolating due to Covid-19. Recently, a 50-million-euro Holiday Inn near Dublin Airport, which has only been open for seven months, is set to become the next direct provision centre. When the White Paper came out, #DirectProvisionIsOver was trending on Twitter. If Aramark is getting more contracts without any noise, and a large Holiday Inn is set to become a new centre, is that really the case?

EURASIA – A Landscape of Mutability

The Treaty, 1921: Records from the Archives